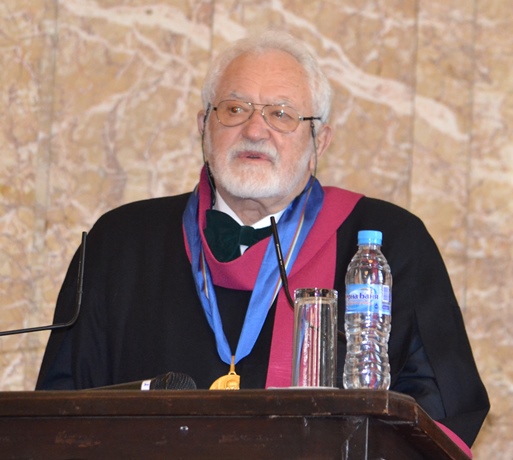 At a ceremony held in the Aula of the Alma mater, Prof. DSc. Stoyko Fakirov was awarded the honorary title “Doctor Honoris Causa” at Sofia University “St. Kliment Ohridski “. The proposal for the honorary title of the oldest and most prestigious higher education institution in Bulgaria is the Faculty of Chemistry and Pharmacy and it is about the substantial contribution of Prof. DSc. Stoyko Fakirov for the development of science and technology of polymers in Bulgaria.

The ceremony was opened by the Dean of the Faculty of Chemistry and Pharmacy, Prof. DSc. Peter Kralchevsky, who briefly presented the biography of Prof. Stoyko Fakirov.

Prof. Fakirov is a prominent Bulgarian scientist in the field of polymer science, who has been working for 17 years and is successfully working at the Center for Advanced Composite Materials at the University of Auckland, New Zealand. It has made a significant contribution to the development of the science and technology of polymers in Bulgaria. 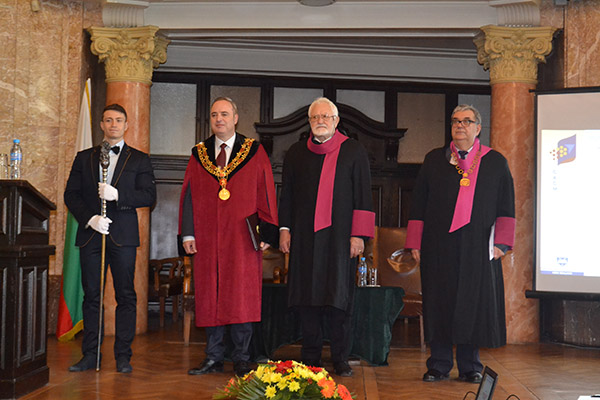 The Dean of the Faculty of Chemistry and Pharmacy underscored that Professor Fakirov was a scholar at the Alexander von Humboldt Foundation in 1971-1972 and 1989, and in 2000 he received the Humboldt Research Award – the highest award for science in Germany. Winner of many national and international awards, guest lecturer has delivered 126 lectures all over the world.

Acad. Kralchevsky recalled Professor Fakirov’s Prize – Medal for remarkable studies of contemporary materials by the International Association for Advanced Materials (IAAM). The association has more than 50000 members from over 140 countries, and the medal was awarded at a special ceremony on 22 August 2017 at the European Congress of Contemporary Materials in Stockholm, Sweden. The IAAM Medal – 2017 is a recognition of Professor Fakirov’s achievements in the development of new polymer-polymer nanomaterials, mono-nanoparticle polymer nanocomposites as well as the new technology he has created, enabling the conversion of each bulk into nanomaterial with controlled morphology.

Acad. Kralchevsky stressed that, in the course of all his international successes and confessions, Prof. Fakirov continued to emphasize his belonging to Bulgarian science and especially to the Sofia University “St. Kliment Ohridski “. “He has donated copies of all his books to the Library of the Faculty of Chemistry and Pharmacy and continues to maintain good relationships and active contacts with his colleagues at the faculty. Many of his graduates have been successful as scientists in Bulgaria and abroad, “Acad. Kralchevski said.

Professor Fakirov’s scientific and teaching activity goes to the Faculty of Chemistry and Pharmacy of the University of Sofia as a lecturer in polymers physics. He is the co-author of the textbook, in which this discipline is now taught in the faculty.

Prof. Fakirov was the head of a number of master’s and doctoral dissertations. He was guest lecturer and researcher at universities in Germany, USA, Turkey, Spain, Portugal and New Zealand. He is a member of the Academy of Sciences in New York, the European Physical Society, the Union of Scientists in Bulgaria, the Bulgarian Polymer Society.

Prof. Fakirov is one of the most successful and proven scholars of the Department of Pharmaceutical and Applied Organic Chemistry at the Faculty of Chemistry and Pharmacy. He has great merit in the development of the department, he is also the founder of the Laboratory of Polymer Structure and Properties (from 1984 until his retirement in 2005). Prof. Fakirov has been awarded at the Sofia University and as Deputy Rector for the period 1987-1989. In 2016 Prof. DSc. Stoyko Fakirov was awarded with an entry in the Honorary Book of the Sofia University “St. Kliment Ohridski “.

After honoring the honorary title “Doctor Honoris Causa” at the Sofia University by Prof. Anastas Gerdjikov, Prof. Stoyko Fakirov expressed his excitement to be in the Bulgarian temple, the sanctuary of science and education. He said that as a student, hearing the word “chemistry”, he decided he wanted to be a chemist, to study this science at the Sofia University. Prof. Fakirov returned to his memories of his university student candidate exams, his lecturers and his scientific path. 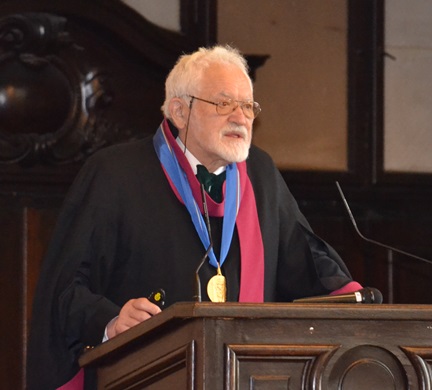 He gave an academic speech on “Polymer science and Stoyko Fakirov (Where, what, and with whom he researched)”. In it Prof. Stoyko Fakirov answered the question “Is the science of polymers old?” And pointed out that although in terms of the object of research – the living matter belongs to the oldest sciences, as an independent one, it was formed in 1920-1930 He talks about the “father” of polymer science – Professor Hermann Staudinger, about the discoveries of Wallace Carothers. Prof. Fakirov presented curious facts about the length of the macromolecules and revealed how small a nanometer is.He also talked about his first steps in science, his studies in Moscow, his work with Professor EH Fischer as a Humboldt scholarship and emphasized the role of the Humboldt Foundation in his creative development.

A significant part of his speech was devoted to collaborative work and projects with Prof. D. Schultz, Microharness Studies with Professor FH Balta-Kaeha and the research with Prof. K. Friedrich
Prof. Fakirov spoke about microfibrillated polymer-polymer composites, and the focus of his lecture was polymer nanocomposites by “transformation instead of addition” and nanofibril polymer-polymer composites.
At the end of his speech Prof. Stoyko Fakirov expressed his gratitude to the members of the Academic Council of the Sofia University, the Rector Prof. Anastas Gerdjikov, the members of the Faculty Council of the Faculty of Chemistry and Pharmacy and personally to the Dean Academician Petar Kralchevski, to his graduates, post-graduates and associates who have made the described ideas into real results. 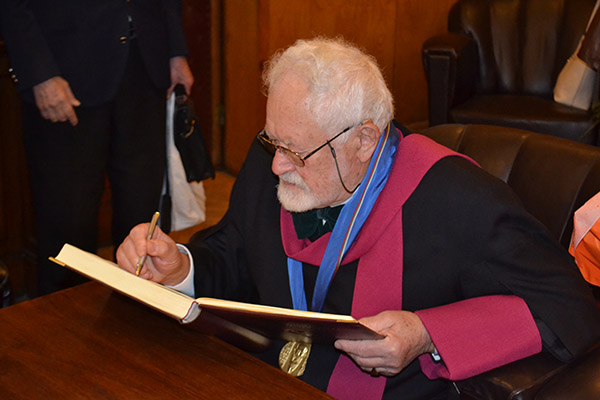 Prof. DSc. Stoyko Fakirov from the University of Auckland in New Zealand was awarded the Honorary Title “Doctor Honoris Causa” at the Sofia University
vasileva 10/10/201810/10/2018 Uncategorized